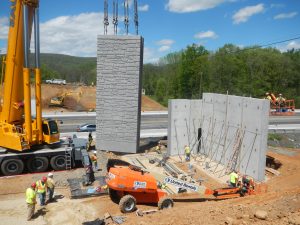 JMT’s accelerated bridge construction (ABC) techniques on the I-78 under clearance project in Berks County, PA recently received a Transportation Special Solution Award during the Precast/Prestressed Concrete Institute (PCI) 2020 Design Awards. This project was the first of its kind in Pennsylvania.

The PCI Design Awards recognizes “design excellence and construction quality using precast concrete,” according to the organization. PCI “is the technical institute and trade association for the precast/prestressed concrete structures industry.”

The Pennsylvania Department of Transportation (PennDOT) sought to replace six bridges over I-78 to increase the minimum vertical clearance and accommodate future widening. Alfred Benesch & Company and JMT were independently selected by PennDOT to design two separate packages, each consisting of three structures along this corridor between Harrisburg and Allentown. Initially, these bridges were to be constructed using conventional techniques under staged construction, maintaining a single lane of traffic in each direction. During the design process, PennDOT asked the teams to merge their efforts and produce a single bid package that incorporated ABC techniques under roadway closures to accelerate the project. In addition, some economy of scale was anticipated considering the similarities of the six structures.

This was PennDOT’s first project featuring tall abutments to be constructed using precast elements specifically designed for this purpose. The six-bridge package allowed the contractor and pre-caster to become efficient with this technique.  JMT was the lead project manager during the design process, which included both the innovative bridge design and an equally innovative procurement method to allow for the valuing of road users’ time as part of the low bid calculation.

I-78 Under Clearance Bridge Project Awards